​Coming soon!  Until then visit ShopTurquoiseRings.com for information about our turquoise rings.

Opal is a tightly packed array of millions of spherical particles of amorphous silica (SiO2 NH2O).  Opal has a hardness of 5.5 to 6.5 on Moh’s Scale. It is estimated to take five million years to form a layer of opal one-centimeter thick.  Opal is the only gemstone known to man to have the natural ability to diffract light.  An opal’s color is created when the voids between the particles split light entering the stone.  The size and alignment of the spheres and voids, as well as the light source, determines the colors produced. To view an opal’s color play at its best, the light source must be coming over your shoulder.  An opal’s color can cover the full spectrum of the rainbow.

Opal has been mined worldwide; however, Australia accounts for 96% of all commercial opal and is the main source of precious opal.  Opal is mined in many locations throughout New South Wales, Queensland and South Australia.  The main areas of opal production are Mintabie, Lightning Ridge, Coober Pedy, Andamooka and Queensland.  Most opal in Australia is found in Cretaceous rock with one exception; opal from the Mintabie area is found in Paleozoic rock.  Opal may form in vertical or horizontal seams in the sandstone as well as in fossilized formations.  Because of the unique conditions under which opal is formed, it is nearly impossible to find two opals exactly the same.  For more information on opal mining go here.

The ancient Romans first popularized opal.  The Romans believed opal brought the owner good fortune and carried the gem as a good luck charm.  The early opal of the Romans is thought to have been mined in a mountainous region of what is now Czechoslovakia.  Precious opal was used in the crown of the Holy Roman Emperor as well as the crown jewels of France.  Fine opal gems are today owned and worn by Royally and Heads of State.  Queen Victoria was a lover of opal and often presented her friends and daughters with gifts of opal.  Opal became highly sought after when the Royal Court of Britain began wearing opal after its discovery in Australia.  Royals were regarded as the model of fashion around the world and soon opal was fashionable worldwide.

Today you will find opal used in various qualities and forms.  Opal appears in jewelry in grades ranging from milky white to the finest black stones.  Opal may be cut into solid cabochons, doublets or triplets.  A doublet is formed by attaching a black backing with epoxy to the opal, thereby enhancing the color.  A triplet is made by sandwiching a thin slice of opal between a black backing and a piece of polished quartz.  Doublets and triplets are both considerably less valuable than solids. Opal inlay has become very popular over the last twenty years.  Inlaying involves precisely cutting the stone, grinding it to fit in a channel, and gluing it in place.  The opal is then ground down flush with the metal and brought to a high polish.  Some fine examples of precision inlay can be found at AustralianOpalJewelry.com.  Special care should be taken to prolong the life of your opal jewelry no matter what form or grade you purchase.

Caring For Your Opal Jewelry

Contrary to popular belief, high quality Australian opal is not soft, porous, or subject to cracking.  There is no need to chemically treat good Australian opal. Practices such as soaking in water or wiping with oils will not enhance the opal. Prolonged exposure to water or oils may, however, weaken the bond between the stones and the epoxy used to hold them in the channel.

Do not clean opal inlay jewelry or any inlay jewelry in an ultrasonic cleaner.  Over a period of time, chemicals and heat may affect epoxy that secures the inlay in the channel, allowing the pieces to fall out .  Always remove your Australian opal ring before cleaning with chemicals or running very hot or cold water over it.  Extreme changes in temperature may be harmful to the opal and the epoxy.  If your opal jewelry is accented with diamonds, sapphires, etc., then simply brush them with a toothbrush and mild soap from the top and the bottom.  When the surface of the opal or the metal loses its luster, return the piece to us for refinishing.  If you have an accident and break a stone, we can drill it out and replace it without a problem. 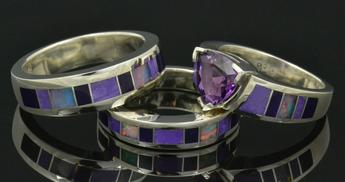 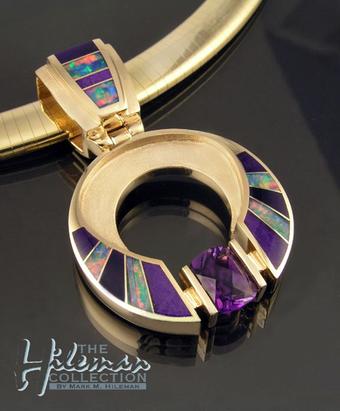 The dinosaur bone we use in our dinosaur bone jewelry is usually referred to as “gembone”.  It is actually not bone but is a combination of minerals that have replaced the organic bone over time.  Fossilized dinosaur bone is found in a rainbow of colors with the webbing color and cell size varying greatly from piece to piece.  The varying cell size and colors create some truly unique patterns and virtually one of a kind pieces of dinosaur bone jewelry.  The fossilized dinosaur bones can be composed of many different minerals including agate, jasper and calcite.  The bone color is determined by the combination of minerals present when the fossilized bone formed.  Some colors are more rare than others with multicolor cells  in a nice pattern being the most sought after.  The high quality dinosaur bone we use in our dinosaur bone jewelry has a hardness of 6-7 on the Moh’s scale.  The bone inlaid in our rings and jewelry comes from the Colorado Plateau and was a living animal during the Jurassic Period around 144 to 208 million years ago.

Your dinosaur bone jewelry requires no special care other than protecting it from being damaged by blows or impacts from hard objects.   You should also protect the epoxy from extreme temperature changes and prolonged exposure to water, oils or chemicals.

​Laboratory created opal's chemical composition is the same as natural opal with the exception of water content. High quality Australian opal contains about 4% water and lab created opal contains no water. Instead, the water is replaced with resin in lab created opal. The resin gives the synthetic opal more durability and helps to resist cracking. Laboratory grown opal gives you all the fire and colors of top grade natural opal at a much more affordable price with the added benefit of increased durability for your opal jewelry.​

We take great care to strategically cut our lab created opal to minimize the telltale uniformity, usually seen in lab created opal jewelry, that makes it easy to identify  the opal as lab created.  We select sections of the opal with random fire patterns to give our lab opal jewelry a more natural look.   We have quite a variety of laboratory grown opal colors to choose from.  If you don't see an example of the color you are looking for ask us and we may have it.

Sugilite is named for the Japanese geologist who discovered the first specimens in 1944, Mr. Ken-ichi Sugi. The location of the first discovery was the Iwagi Islet in Southwestern Japan. The original Japanese sugilite samples were just tiny, yellow crystals with no gem value. In 1955 some dark pink crystals of no gem value were found in India that were also identified as Sugilite.

In 1975, the only known deposit of gem grade sugilite was found in the Wessel Mine in the Kalahari Desert near Hotazel in Kuruman, Republic of South Africa.  At first it was thought to be a very small sugilite deposit, but later found to be a commercial sized deposit estimated to contain as much as ten to twenty tons located 3,200 feet below the surface.  Sugilite commands a high price for an opaque gem material, due in part to the difficulty of removing it from such a great depth.  (See excerpt from 1982 Time Magazine article below)

Sugilite often contains black matrix, reddish brown or yellowish blotches.  Some of the lesser grades have very light purple to white areas.  Opaque bright purple stones with little matrixing or blotches are the highly valued. While almost all sugilite is opaque, a very small percentage, perhaps 1/10 of 1% is translucent. Due to its rarity and mesmerizing beauty, this gem grade commands the highest prices.   At its peak, stones of this quality climbed to as high as $1000 per carat.  Sugilite ranges between 6 - 7.5 on the Moh's scale of hardness.  The bright purple color of sugilite makes for some striking jewelry especially when combined with other gemstones such as amethyst.

Sugilite is also known under the trade names of "Royal Lavulite" and "Royal Azel".

It is thought that sugilite strengthens the heart and promotes physical healing as well as reducing stress by balancing the mind, body and spirit.   Sugilite seems to protect against and dissipate anger and other negative energies by encouraging peace of mind, a general feeling of well being and spiritual love.

"Occasionally, there is something new under the sun or, in the case of a beautiful new gem called Royal Lavulite, under the earth. The deep translucent purple stone, known to mineralogists as sugilite, was officially classified as a rare gem in October 1980, and prices for the stone quickly climbed to as much as $1,000 a carat, compared with $3,000 to $5,000 a carat for the finest grade commercial diamonds.

Sugilite has been found in Japan and India, but only in small deposits that were not of gem quality. In August 1980, workers in a manganese mine in South Africa first discovered a vein of purple stone after a cave-in. They smuggled the stone out in their lunch pails, and from there samples were brought to the U.S. Phoenix jeweler Randy Polk saw them, and traveled to South Africa. Polk went from house to house in the dusty interior town of Hotazel, negotiating with the miners to buy the stones. He now owns nearly 100 lbs., or half the estimated world supply." 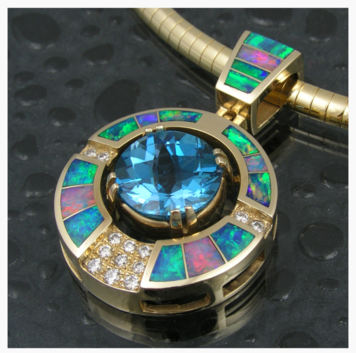 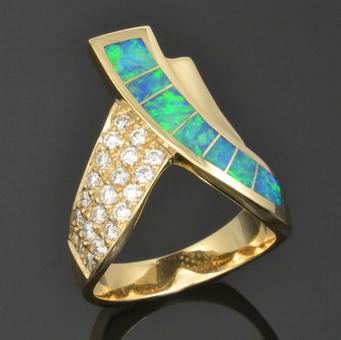 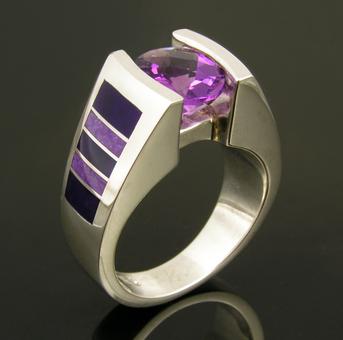 This ring is a great example of the range of colors in sugilite.  Looks fantastic with amethyst! 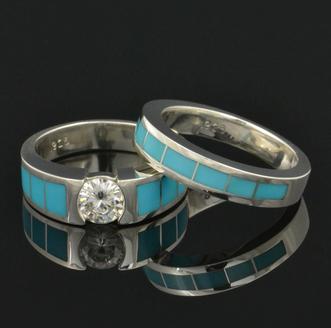 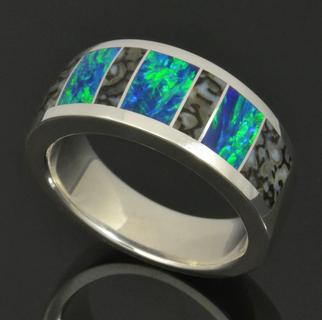